Anterior cervical discectomy and fusion (ACDF) is a surgical procedure used in the management of spinal cord and nerve root compression secondary to certain disorders such as degenerative disc disease, herniated disc, spondylosis, and spinal stenosis. ACDF reduces the neck and arm pain and provides stability to the spine. 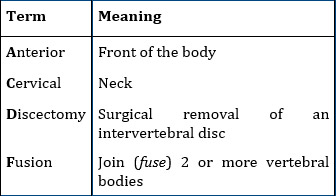 Before the surgery, the neurosurgeon explains the details of the procedure to the patient including the possible risks and complications such as infection, bleeding, nerve damage and reaction to anesthesia.

A minimally invasive approach may be employed in some individuals depending on their diagnosis, medical history, earlier treatments and other factors.

A general health clearance from a general physician is essential for the surgery. This assessment may comprise of blood tests, X-rays or other imaging studies, along with special tests for the diagnosis of other medical problems such as diabetes and cardiac disease.

Anterior cervical discectomy and fusion is performed under general anesthesia. During the surgery, different gauges, monitors, and equipment are employed, which provides the visual and audio feedback to the surgeon. All the vital functions, including central nervous system are carefully monitored throughout the procedure. Image guidance such as real-time X-ray or fluoroscopy helps the neurosurgeon to visualize the surgical field during the surgery. The essential steps involved in minimally invasive ACDF are as follows:

After the surgery, the patient is brought to the recovery area, where the medical staff monitors the vitals and also manages post-operative pain. Patients may experience pain at the site of incision, spasms of the neck muscles, or other symptoms. After the surgery, a cervical brace is placed on the neck of the patient.

Some of the common post-spine surgery instructions which the patient needs to remember are as follows:

Call your neurosurgeon's office for any of the following problems: